As of the 1st of December of the current year, the general contractor responsible for the project has announced the need to delay commissioning of the fourth (final) construction phase of the new oil-extracting factory.

Rescheduling is the result of several factors. The main and most painful issue was the receipt and approval of technical and permit documentation beginning from the design stage. According to chief engineer, it only took about four months to undergo bureaucratic procedures in order to be admitted to construction; the beginning of construction was rescheduled for the same term. There was also detailed geological survey of the area, which had showed that ground waters flow above the envisaged by project level, which prompted the manufacture of 540 strengthen piles on individual order, which formed the basis for all supporting structures. Furthermore, an additional foundation damp-proofing course was conducted for the foundations, which weren’t foreseen by the original design.

To date, readiness of the project is estimated by the contractor at 82%. There is only an assembly of already delivered equipment and facing work of the supporting structures before the project will be completed. Commissioning is scheduled for March 2018 and despite the start is planned for the period of high prices for raw materials, management of the group decided not to put off pre-commissioning activities to reach the nominal production capacity and receive export characteristics of finished goods before the new season. 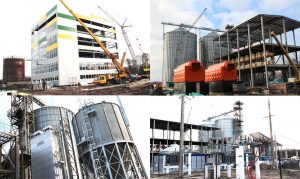